The Town and its Surroundings

The Loket castle and the Loket town in the valley of the Ohre river is a jewel of 12th century, the most visited monument within the region of Karlovy Vary (also Karlsbad). The Romano-Gothic fortress belongs to the most well-preserved castles in Central Europe, including its fortification that surround the town above the Ohre river. Most of the town buildings below the castle were raised in the Gothic period but also Baroque and Renaissance period. The Loket town as a whole was placed on the list of preserved monuments.

To visitors, Loket offers great opportunity to relax in cosy restaurants and coffees, the tourists can enjoy visits of interesting musea – of Spa Goblets, Brewery, Secret Societies, also of Book-binding and The Word of Yesterday. 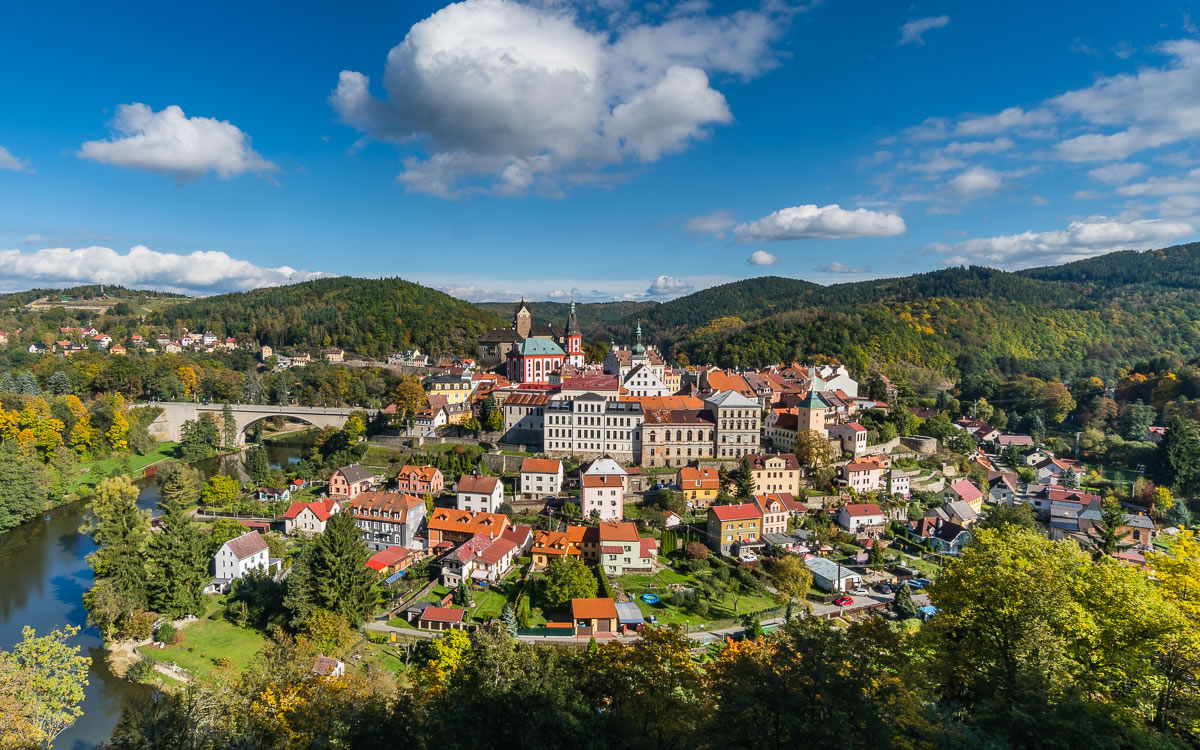 If the visitors are oriented toward sports, they can enjoy shorter or longer walks or to follow food-paths leading around the town, there is possibility to rent a bicycle or take the boat or the canoe down the river. The local cyclopath would take you around the Karlovy Vary region. Every summer, many bikers come to the town, to see a great event – FIM Motocross World Championship in Loket.

During summertime, a lot of concerts and theatre performances take place in Loket´s Natural theatre (Amphitheatre), on the squares or in the Castle.

Under the rule of Schlick Dynasty, the re-building of the original St. Wenceslas church took place. The original church burned down and was newly built in late Gothic style, the works finished in 1476. Today, the Church can be seen in its Baroque shape, originated in 1734. The work was set up by Wolfgang Barunbock, apprentice of Christoph Dienzenhofer and the works were accomplished by Jan Ondrej, his son. In 1875, the altar-piece of St. Wenceslas´ death by Petr Barndl was awkwardly renewed. Madonna and Child, a painting by Ludvik of Cheb from 1476 escaped the fire occurring before the Baroque rebuilding and belongs among the most valued pieces.

Abraham Leutner begun the Townhall construction, after the town council order of 30th June 1682, the Townhall was finished in 1696. The coat of arms of Loket town can be seen under the main ledge, above the entrance. The coat of arms decorated the previous Townhall building of 17th century, later devastated. On the coat of arms, we can see an armoured arm with a sword, symbol of royal city, and a Bohemian lion with a key to the Bohemian Kingdom. Preserved ribbed vault can be seen on the groundfloor. The windows are decorated with artistic window bars of 1686 by J.J. Schuhmann, Loket´s lockshmit.

In 1717, three years after the plague break out, a Holy Trinity Column was created by Johann Karl Stilp, with the help of Martin Lembach, masonry master, his son Sebestian Antonin and sculptor Oswald Wenda from Zlutice. The column depicts Holy Trinity, three archangels and six saints, patrons of the town: St. Wenceslas, St. Florian, John the Baptist, St. John of Nepomuk, St. Sebastian and St. Immaculata.

Prayers in golden letters as well as the year of erection of 1719 can be seen carved on three sides of the column.

Those two towers were parts of the town fortification in 14th century, both were finished under the rule of Wenceslas IV. The defensive ring was finished in 15th century. Both towers are of square platform. The Robicska Tower is one meter narrower in descent than the Black Tower, also sometimes called Prague Tower. It is right next to the town gates, the only entrance to the town and it was related to the side access to the castle.

The statue of J.W. von Goethe by Willibald Russ of Krasno was erected in 1932 at the occasion of Goethe´s birthday anniversary. All Loket residents contributed to pay the artistic work. The above-lifesize statue of Bavarian sand-stone is placed in a little park at the original town entrance.

The original fortification was built during the reign of Ottokar II. The walls were one to two metres thick and were reinforced by half-curved towers where the guntports remain still intact. The inner fortification had also its armoury – a building sharing one wall with the inner town gate. John of Luxembourg had the fortification repaired later on and Wenceslas IV after him too. At the town fortification, blacksmiths, tawers, dyers and weavers performed their craft as they needed access to water.

All visitors will take pleasure by taking shorter or longer walks around the town.

Short walks through the town will lead the visitor by the river – through the Natural theatre, you would walk right through the Kolovratska rocks, across the little swinging bridge, Garden street and under the castle. The town is stunning from all angles!

Longer walks lead through paths above Loket where the visitors can see the whole town from various arbours. If the visitors take the path on the left hand side of the bus station, they will find the Goethe´s Viewpoint, then the Schwarzenberg´s Viewpoint and others. Then the visitors can cross the road to the swinging bridge and back up to the town. The walk takes approximately one hour.

Trips Around the Town

For hitch-hikers and bikers or other demanding tourists, we recommend taking a trip to Jan Svatos Rocks. The cars from the direction of camp cannot enter the area. The tourists would continue down along the river that is app. 6 km on the right hand side, then they will cross the swinging bridge across the Ohre river and will find a nice forest restaurant where they can refresh. Not only can they taste delicious food and good drinks, but the petrified wedding suite of Jan Svatos can be overviewed from a single point here.

Karlovy Vary (also Karlsbad), is the largest spa city in the Czech Republic, with more than 600 years of spa tradition. It is located app. 10 km from Loket. The city was founded by 1350 by Charles IV. It is famous for their natural hot springs. The city architecture is unique, the city is built in Baroque, Classicist and Belle Epoque style. Not only spa represents the tradition in Karlovy Vary but also glass production by Moser, porcelain of Thun, liqueur called Becherovka or mineral water produced by Mattoni.

Becov nad Teplou is a little town located app. 20 km of Loket. A castle and a palace can be visited the town. The castle was founded in 13th century. On the turn of 15th and 16th century, the town of Becov nad Teplou bloomed, under the rule of Pluhs of Rabstejn dynasty. The palace is built in Baroque, Renaissance and Romantic style. The most attractive showpiece that can be seen by the tourists in the castle is the Reliquary of St. Maurus. The visitors will surely enjoy the castle interiors but also garden terraces.

The Premonstratensian Monastery of Tepla is about 40 km of Loket town and it was founded in 1193 by Hroznata, a Bohemian nobleman. The most valued part of the Monastery is Romano-Gothic Church of the Annunciation. In 17th and 18th century, a Baroque Southern Wing of Monastery was built by Christoph Dientzenhofer. Since 1990, the Monastery belongs again to Premonstratensian Rite, it underwent reconstruction and not only visits, concerts and tours take place here but also church services.

The Palace of Kynzvart served as Summer Residence of C. L. W. Metternich, Austrian Empire's Chancellor. It is located app. 36 km of Loket town. In the first half of 19th century, Count von Metternich initiated rebuilding of the original Palace, into a Classicist style settlement. The Palace Library contains collections of unique manuscripts, earliest prints and ancient books. Visitors will surely find very interesting also collections of curiosities of Count von Metternich and of manuscripts of Karl Huss, an executioner being in the Count´s service as collection curator since 1827.

The Protected Landscape Area of Kladska can be found about app. 30 km of Loket Town and it is a part of Slavkovsky les (Emperor´s Forest). The area has been under protection since 1993. The average landscape level is 850 m a.s.l. There are educational trails built for visitors, to find the same nature as the one in Siberian taiga. You can also visit the Kladska´s Hunting Lodge, made of carved wood in alpine tyrolish-style. The original owner was Prince of Schoenburg-Waldenburg. Nowadays, you can visit a restaurant here and admire the alpine-tyrolish style.

The State Natural Reserve of Soos, not far from Frantiskovi Lazne (also Franzenbad) and app. 42 km of Loket town has been preserved since 1964, its size is app. 221 ha. This area is the cradle of all spa places in Western Bohemia. In Soos, the fading period of active volcanicity can be seen, in the form of rising hot springs and evasive gases. Visitors can find vast peat bogs here, with a number of moffettes, also called “mug volcanoes”. You can try the strongest and the tastiest hot spring called also “Imperial Spring”. The educational trail will lead you through saline sediment landscape where the visitors can see many protected and endangered plants, among them also round-leaved sundew. The local museum visit is highly recommended.